At WESS level social and economic empowerment has been conceived as the process of developing a sense of self-independence and self-confidence in the population of target areas and acting collectively to change social relationships and the institutions for poverty eradication.

WESS, under the sub sector has struggled for the empowerment of poor peoples of Balochistan through participatory approach by empowering them towards their livelihood sources including but not limited to land, housing, livestock, savings, social services, asset building and the ability to aspire poor people for a better future. Since its inception WESS has completed 09 projects under this sector in different districts of Balochistan.

Since its inception WESS has successfully completed several projects in WASH sub sector with the help of trained and experienced staff. WESS has a separate WASH section comprising skillful and trained staff. Social experts of WASH component make sure that 100% participation of local target communities/schools are ensured in program interventions for ownership and sustainability of each project/program. Whereas technical staff make decision about best use of available options and resources in water and sanitation components. Under the sub sector WESS has completed 14 projects.

WESS has a vast experience of 18 years in implementing education projects being focused on quality education, formal and non formal education, school opening, teachers training, social mobilization, advocacy/networking and school rehabilitation programs among others. WESS is active member of Education cluster, contributed in the formulation of education sector plans with Government of Balochistan and UNICEF for the promotion of education sector in Balochistan. WESS achievements in education sector has significantly contributed to different national and international targets/goals i.e. EFA (Education for All Targets), Balochistan Education Sector Plan, MDGs and SDGs targets/goals. WESS has successfully completed 20 projects in education sub sector.

WESS being a national NGO and a key player at provincial level is striving to reduce poverty and suffering of poor population of Balochistan. WESS is one of the few organizations of Balochistan that played proactive role in recognition of drought in Balochistan through different long term projects with the help of different donors.  WESS efforts have made substantial investments in exploring suitable and appropriate way forward for the people of Balochistan to improve their livelihoods. WESS has successfully completed 09 projects in livelihood sub sector with special focus on IWRM- Integrated Water Resource Management, Natural Resource Management and agriculture livelihood sectors.

WESS interventions in sub sector resulted to create an institutional mechanism for addressing challenges of good governance by bringing together potential groups, building their capacity and transforming them into one unit. The self-sustained forums, organizations and networks worked as an autonomous body and promoted awareness on rights guaranteed to the citizen in accordance with the constitution of Pakistan. The capacity of these group were also enhanced on constitutional rights and rule of law. WESS projects in sub sector intervened at the grass root level also focused on universities, press club, bar councils, women, media, Lawyers, and other public representatives at the union council level. In order to create momentum in the targeted groups, various thematic events and capacity building measures were undertaken which significantly contributed towards good governance and human rights. WESS has completed 05 projects under sub sector.

In this sub sector WESS has formed 270 male and 310 female community groups. Whereas 2,800 males and 3,175 females became part of these groups. WESS had also delivered 210 female and 180 male CMST trainings to the members of community groups.

WESS also supported the local government system under sub sector. In this regard WESS had formed 55 male and 38 female CCBs-Citizen Community Boards in targeted areas.

As a result of WESS interventions 89% of forum members trained and gained significant knowledge about good governance, rule of law and transitional justice. 100% of the targeted groups and their intuitional heads were trained in Leadership Management Skills which resulted in improved advocacy and better policy implication for human rights in line with Pakistan’ constitution.

Community Development is the foundation of sustainable growth and impacts access to social, economic and basic human rights of people. WESS’ Community Development programs ensured sustainable growth and foster security, gender equality, development opportunities and economic stability in rural and urban milieu and refugee communities of Balochistan. The interventions at rural level addressed the problem of water scarcity, food security and basic needs of communities using an integrated approach to development whereas at urban level the programs were initiated to create a self- sustainable, social capital network for marginalized urban communities through resource mobilization, capacity building, vocational skill and linkages with government welfare schemes. WESS has successfully implemented several long term projects under the sub sector. WESS has completed 4 projects under the sub sector.

To uphold and protect the basic rights of working children as envisioned in the Convention on the Rights of the Child, WESS significantly contributed to said convention,  implementing Working Children’s Protection Program since 2002, with the support of different donors like Plan Pakistan, UNICEF, Oxfam, UNICEF and Concern Worldwide in Quetta. The aim of these projects were to provide basic necessities and protection to working children of Quetta. Working Children Protection programs ensured access of working children to education, recreation, health and hygiene services and vocational training for older children and their families. The program not only enhanced the protection and socio-economic conditions of working children but also enhanced the income of parents of working children through vocational skill development in different marketable trades. The program was run through  Drop in Centers, outreach learning facility and vocational skill facility for older children and their parents. Number of projects completed under sub-sector: 07

Number and nature of interventions with beneficiaries details 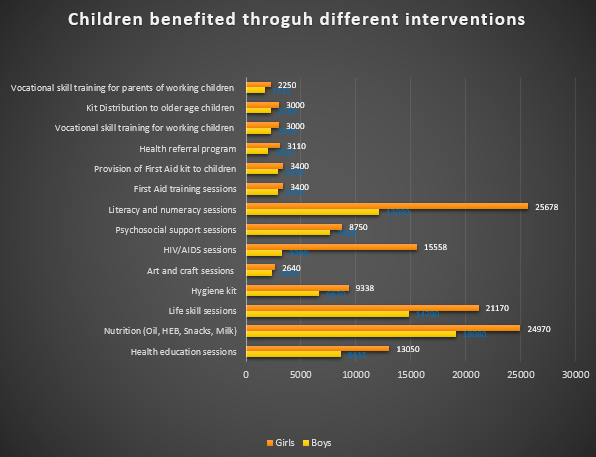 WESS has a dedicated team to respond to emergencies across Balochistan. Since its inception WESS has responded in all kind of emergency situations in different districts of the province. We focus on emergency response, rehabilitation, reconstruction, prevention, mitigation and preparedness with special focus on gender, diversity, climate change, conflict-sensitive programming and advocacy for a resilient society. In this regard WESS has supported over 750,000 people in the provinces of Balochistan. Number of projects completed under sub-sector = 28.

Nature of interventions in emergency response

WESS carried out an internal Training Need Assessment of the Organizational Staff and identified the significant areas where the staff needed crucial support in their capacity building. The human resource department in collaboration with WESS management devised a plan to optimally capitalize the in-house expertise of staff by complementing and supplementing each other.

The details below show the gender segregated status:

In the end of the training participants were awarded with certificates signed by facilitator and WESS management.